A sunspot pointing toward Earth has the potential to cause solar flares, but experts said it’s far from unusual and eased concerns over how flares would affect the Blue Planet. Do you believe that? 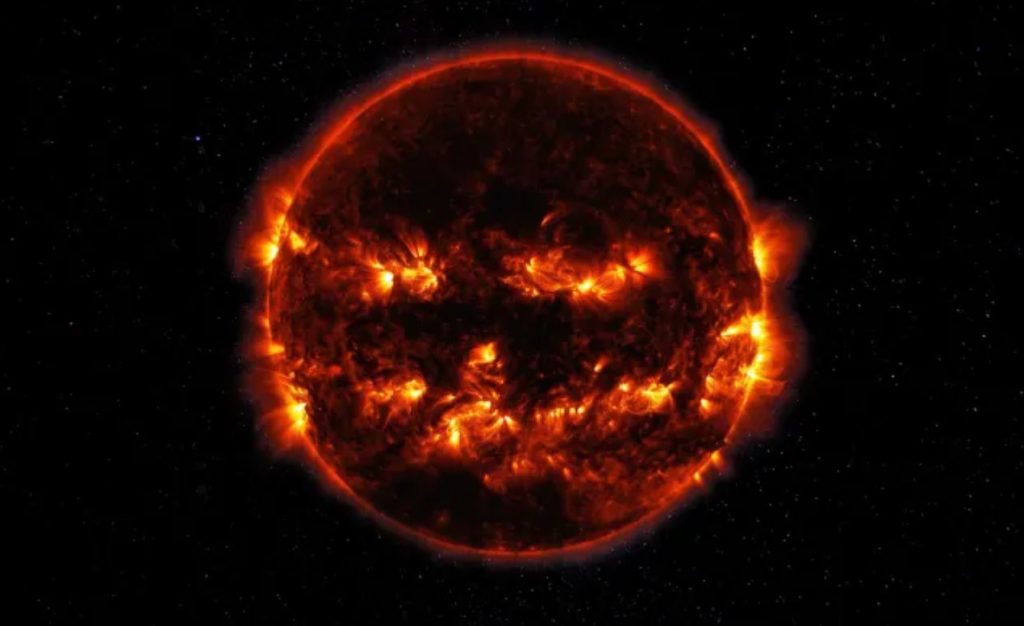 Active Region 3038, or AR3038, has been growing over the past week, said Rob Steenburgh, acting lead of the National Oceanic and Atmospheric Administration’s Space Weather Forecast Office.

“This is what sunspots do,” he said. “Over time, generally, they’ll grow. They go through stages, and then they decay.”

“I guess the easiest way to put it is that sunspots are regions of magnetic activity,” Steenburgh said.

Solar flares, which typically rise from sunspots, are “a sudden explosion of energy caused by tangling, crossing or reorganizing of magnetic field lines near sunspots,” NASA said.

“You can think of it like the twisting of rubber bands,” Steenburgh said. “If you have a couple of rubber bands twisting around on your finger, they eventually get twisted too much, and they break. The difference with magnetic fields is that they reconnect. And when they reconnect, it’s in that process that a flare is generated.”

Imagine a tornado 20,000 km tall, twirling hot plasma in a vortex big enough to swallow Earth. Apollo Lasky of Naperville, Illinois, photographed the twister on June 21st, the summer solstice, using a backyard solar telescope. This solar storm system did not hurl material toward Earth. Instead, most of the tornado fell back to the sun after an exhausting spin.

The larger and more complex a sunspot becomes, the higher the likelihood is for solar flares, Steenburgh said.

The sunspot has doubled in size each day for the past three days and is about 2.5 times the size of Earth, C. Alex Young, associate director for science in the Heliophysics Science Division at NASA’s Goddard Space Flight Center, said in an email.

Young said the sunspot is producing small solar flares but “does not have the complexity for the largest flares.” There is a 30% chance the sunspot will produce medium-sized flares and a 10% chance it will create large flares, he said.

W. Dean Pesnell, project scientist of the Solar Dynamics Observatory, said the sunspot is a “modest-sized active region” that “has not grown abnormally rapidly and is still somewhat small in area.“

“AR 3038 is exactly the kind of active region we expect at this point in the solar cycle,” he said.

Andrés Muñoz-Jaramillo, lead scientist at the SouthWest Research Institute in San Antonio, said the sunspot is nothing for people on Earth to worry about.

“I want to emphasize there is no need to panic,” he said. “They happen all the time, and we are prepared and doing everything we can to predict and mitigate their effects. For the majority of us, we don’t need to lose sleep over it.”

Solar flares have different levels, Muñoz-Jaramillo said. The smallest are A-class flares, followed by B, C, M and X at the highest strength. Within each letter class is a finer scale using numbers, and the higher numbers denote more intensity.

Prepare NOW! SAVE your retirement money by investing in GOLD, SILVER and other PRECIOUS METALS…

Lower-intensity solar flares are pretty common; X flares are less so, Steenburgh said. In a single solar cycle, about 11 years, there are typically about 2,000 M1 flares, about 175 X1 flares and about eight X10 flares, he said. For the largest solar flares at X20 or above, there is less than one per cycle. This solar cycle began in December 2019.

If you go by the “scales” of the NOAA Space Weather Scales it would be:

Other systems: Pipeline currents can reach hundreds of amps, HF (high frequency) radio propagation may be impossible in many areas for one to two days, satellite navigation may be degraded for days, low-frequency radio navigation can be out for hours, and aurora has been seen as low as Florida and southern Texas (typically 40° geomagnetic lat.).

Biological: Unavoidable high radiation hazard to astronauts on EVA (extra-vehicular activity); passengers and crew in high-flying aircraft at high latitudes may be exposed to radiation risk.

Health Ranger Store: Buy US-made, non-GMO Food and Products to heal your body, your soul and the world…

Satellite operations: Satellites may be rendered useless, memory impacts can cause loss of control, may cause serious noise in image data, star-trackers may be unable to locate sources; permanent damage to solar panels possible.

HF Radio: Complete HF (high frequency) radio blackout on the entire sunlit side of the Earth lasting for a number of hours. This results in no HF radio contact with mariners and en route aviators in this sector.

The AR3038 sunspot has caused C flares, Steenburgh said. Although there have been no M or X flares from this area, he said there is a potential for more intense flares in the next week or so. [phys]

Do you believe NASA and any governmental agencies?