Scientists were recently left scratching their heads after a “potentially disruptive” solar storm smashed into Earth without warning.

The surprise solar storm hit Earth just before midnight UTC June 25 and continued throughout most of June 26, according to Spaceweather.

Scientists classified it as a G1-class storm, which means it was strong enough to create weak power grid fluctuations, cause minor impacts to satellite operation, disrupt the navigational abilities of some migrating animals, and cause unusually strong auroras.

The unexpected solar storm coincided with the peak of an extremely rare five-planet alignment, where Mercury, Venus, Mars, Jupiter and Saturn lined up in the sky in order of their proximity to the sun (which hasn’t happened since 1864).

Amateur astronomers in the northern hemisphere were able to capture images of the surprise auroras as they photobombed the neatly aligned planets.

Photographer Harlan Thomas captured an image of bright auroras in Calgary, Canada, which flashed across the dawn sky in front of the planetary alignment on June 26.

“Wow, talk about surprises,” Thomas told Spaceweather.com. “The aurora became [visible to the] naked eye with beautiful pillars,” and lasted for around 5 minutes, Thomas said.

Scientists initially suspected coronal mass ejection (CME) caused the freak storm — a large burp of plasma with an embedded magnetic field that is belched out from a sun spot — but they couldn’t tell if it had occurred on the Earthside or farside of the sun, according to Spaceweather.com.

However, experts now blame a much rarer co-rotating interaction region (CIR) of the sun; these are “transition zones between slow- and fast-moving streams of solar wind,“ according to Spaceweather.com.

These zones create buildups of plasma that can suddenly unleash shockwaves that are similar to CMEs but don’t cause sunspots — which makes them much harder to detect on the sun’s surface.

The solar wind that blasted Earth on June 25 and 26 peaked at around 1.57 million miles per hour (2.52 million kilometers per hour), which is consistent with other CIRs in the past.

The surprise solar storm hit Earth less than a week after a giant sunspot, known as AR3038, doubled in size over a 24-hour period and reached a maximum diameter more than 2.5 times the size of Earth.

The giant sunspot sparked fears of a potentially damaging CME hitting our planet, but the spot eventually aimed away from Earth as the sun rotated. Scientists don’t know if the gargantuan sunspot and the solar storm are connected.

Auroras occur when charged particles from solar wind slam into oxygen and nitrogen molecules in Earth’s upper atmosphere, which ionizes those molecules and causes them to glow.

Normally, auroras are confined to regions around the North and South Poles, where Earth’s magnetic field, which normally deflects these particles, is weakest. But during solar storms, auroras can become much brighter and can be seen at much lower latitudes than normal.

In November 2021, a powerful solar storm produced colorful displays in the United States as far south as Pennsylvania, Iowa and Oregon.

Because scientists initially believed the recent solar storm could have been caused by a farside CME, they predicted that the unusual auroras could last until June 29. However, solar wind activity has now returned to normal. [SpaceWeather, SpaceWeatherGallery, LiveScience] 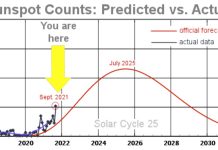