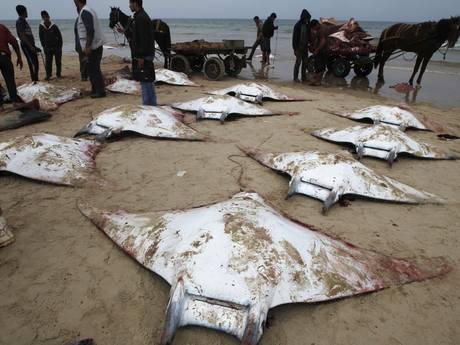 Dozens of Mobula Ray fish were mysteriously washed up on the beach in Gaza City yesterday and carted off to market by Palestinian fishermen. It was the first time the fish had been seen on the beach for six years, according to a local video report. Reaching up to 17ft in length, Mobulas are of a similar appearance to the more well-known Manta Rays
They can weigh more than 12 stone and sell for around five shekels (£0.90) per pound in local markets. Blood on their pectoral fins may have come from slapping something such as boats, rocks, sand, or even each other. – Independent

Could the war or an underwater weapon be the source of the Modula ray die-off? Well, it seems that large underwater noises or electrical signals may cause some state of disorientation. Rays expert says he has never experienced such a large mass stranding adding that modula rays often travel in pods of more than thousand individuals.

Wonderful Rays. I would also like to swim with them.