I already introduced that strange sounds can be linked to meteorite falls. Now I will explain how the meteor infrasound is created. Any shock generating mechanism in the atmosphere can generate infrasonic waves that can be detected as perturbations in density, temperature, particle velocity, or pressure (SNR is best in pressure relative to temperature changes in the ambient atmosphere). Remember this one:

Meteoroids enter the atmosphere at very high speeds and the shock waves they produce decay quickly to infrasound. These infrasound waves, as the decaying shocks from the original meteoroid, can be detected at the ground. Their characteristics (period and amplitude) can be related to primary quantities of interest at the meteor (such as velocity, meteoroid diameter and energy deposition per unit length of trail). The Figure shows how the mach cone created by a meteoroid passage in the atmosphere propagates out from the trajectory (at right angles to the direction of motion) and ultimately reaches the ground where it may be detected. These pressure waves may also couple into the ground and travel as seismic waves. Infrasound has been proven to be a reliable means of detecting bolides and can be used to obtain an estimate of bolide energy, location, event time, and source height. 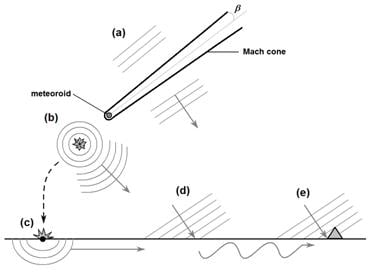 Figure caption. Schematic diagram of meteor generated atmospheric waves and mechanisms of airwave-seismic generation. (a) Generation of shockwaves during hypersonic entry. Propagation is preferentially perpendicular to meteor’s trajectory. (b) Generation of shockwave during meteoroid fragmentation. Propagation is omni-directional or quasi-point-like. (c) Seismic wave generation during meteorite impacts. (d) Seismic precursor wave generation through matching of surface wave speeds (P, S or Rayleigh). Travel via surface speeds allows these waves to arrive prior to the infrasonic wave (e) Direct coupling of the atmospheric pressure wave with the surface at the site of the seismic station (gray triangle). Taken from Edwards et al (2008)