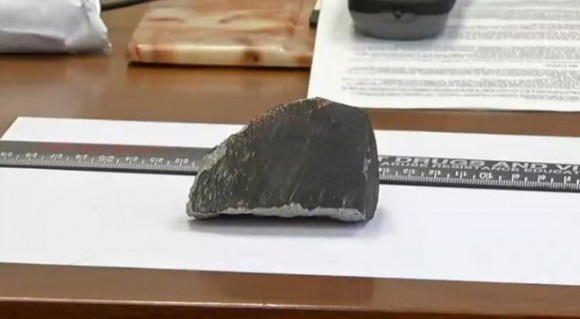 You probably remember that residents from Ledyard, East Haven, Milford, Madison, Branford, and Guilford all reported loud booming sounds accompanied by a big flash of light at around 10 pm along the shoreline in south-central CT on April 19 2013. However, the source of these mystery booms remained unexplained. Many thought it was a small thunderstorm passing by. But according to some posts and comments on this blog, many followers did not believe this was the cause. A meteorite? Most probably!

Well what is sure is that the Yale Peabody Museum of Natural History confirmed that a baseball-sized meteorite crashed the roof of a Wollcott CT resident at around 10 P.M., on April 19 2013, so during the same night. What a coincidence, hey? In a previous posts I demonstrated that meteors are sometimes creating weird noises such as sonic booms or shock waves generated by meteorite fragmentation when entering Earth’s atmosphere.

The explosions can be heard over large areas, depending on the size of the meteorite that is breaking up. Moreover, the Lyrids meteor shower had its peak just at the same time as demonstrated by this amazing fireball footage caught from the sky over Argentina. Are the Lyrids a coincidence? Could sonic booms heard along the shoreline be also related to a meteor strike, a fireball explosion or even a meteorite impact?

This map shows the distance between the fall location in Wolcott CT, and the different locations where the loud booms were reported at around 10 P.M. on April 19 2013. Ledyard is about 50 miles away and East Haven about 20 Miles from Wolcott. This is the third recorded meteorite to land on a house in Connecticut. The previous two fell in 1971 and 1982, both in Wethersfield. 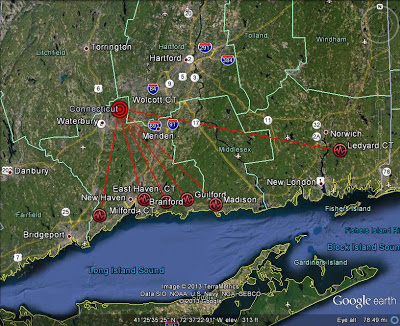