What is behind the strange moose die-off across the USA? It may be related to climate change. 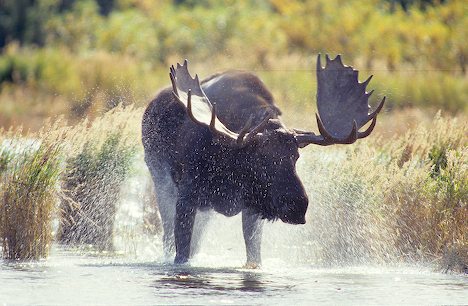 All across the US – from the West Coast to the East Coast, from the Rocky Mountains to the Mississippi River – moose are dying, and scientists yet don’t know how to save them.

But though scientists have a long list of culprits – disease; climate change; over-hunting – it’s not clear just what is causing moose to die in droves. And that means that scientists are at the moment unsure how to save America’s moose.

In New Hampshire, the moose population has dropped from some 7,000 moose to around just 4,600 animals. In Montana, numbers have fallen about 40 percent since 1995, and in Wyoming there are just 919 animals left – a quarter of the state’s target moose population. In Minnesota, the population in its northeast has been halved since about 2010, and moose have disappeared almost entirely from its northwest. Only Maine has seen an increase in its moose population, with some 75,000 animals living within its borders.

Too bad because, they are so wonderful:

Scientists suggest that climate change is a probable factor, but pinpointing just how climate change affects the moose has been difficult. In New Hampshire, scientists have proposed that longer falls and shorter winters has allowed the winter tick population to bloom, the Washington Post reported. Up to 150,000 ticks can beset a moose at one time, bleeding it out until the moose is little more than ribs, antlers, and some loose skin.

In Minnesota, where the average midwinter temperature has risen some 11 degrees over the last 40 years, climate change is also a fingered culprit, the Minnesota Public Radio reported in 2008. The state has been loosing its moose population in the state’s northwest corner over the last 30 years – numbering some 4,000 back in the 1980s, the northwestern moose population had been whittled to less than 100, as of 2008. And it now appears to be losing its separate, northeastern moose population, as well. There, the population has declined some 35 percent between 2012 and 2013, from 4,230 individuals to 2,760 individuals, the Minnesota Department of Natural Resources reported. Since 2010, the northeastern population has been cut in half, it said.

In response, Minnesota announced in February that its winter 2013 hunting season was cancelled. Instead, wildlife researchers swept through the state’s northeaster corridor, affixing GPS tracking and data collection collars to moose, as part of a $1.2 million, multi-year research project to investigate the causes of the moose die off.

I hope we will still be able to look at such amazing videos:

What the scientists will find from that project is at this point anyone’s guess, since how climate change is affecting the moose is still unclear. Some scientists have pinned the die-off on climate-change related stress. As the forests get warmer, moose must expend more effort to keep themselves cool. This puts stress on the animal, leaving it vulnerable to disease, theorize some scientists.

Moose are considered lynchpins to a functional ecosystem, cutting up the brush and leaving behind pre-made nests and hiding places for rabbits and birds, as well as providing nourishment for coyotes and bears.

But the cause could also be ticks, or flourishing wolves, or a worm that attacks the moose’s spinal cord and brain. Or it could be some complex combination these factors. Or it could be some other climate-change related alternation in the moose’s ecosystem or habitat – one, perhaps, that no one has yet identified. Factors not related to climate change, like over-hunting, could also be involved.

The animals also support lucrative tourism industries across the US; New Hampshire alone estimates that moose-tourism brings in $115-million-a-year , the New York Times reported. Indeed, at some 6-feet tall, weighing over 1,000 lbs, and roaming the woods alone, moose are enthralling to watch. Even their footprints are alluring: the animals leave heart-shaped tracks. (SOURCE)