Here are five good reasons to be terrified by the ocean…

While snorkelling in Toyon Bay, marine biologist Jasmine Santana of Catalina Island Marine Institute discovered the remains of this incredible 18-foot (5.5 m) long oarfish. As shown in the above picture, it took almost 20 people to move the rare specimen to the beach. Discover the first footage of such an oarfish in its natural environment.

The remains of a mysterious, bizarre “sea creature” found on a Spanish beach in September has left experts baffled. Is this the carcass of the mysterious and fabled giant skid Architeuthis Dux carcass? Who knows! But one thing is clear: beachgoers stumbled upon a huge, almost intact, and scary squid body on a beach of Cantabria, Spain on october 1, 2013. Video and more pictures here.

3. Amazing ‘unicorn of the sea’ spotted in Tasmania

Deep sea divers captured images of the elusive Pyrostremma spinosum in open water off the coast of Tasmania this year. The incredible deep-sea glow worm dubbed ‘Unicorn of the Sea‘ can grow up to 30 metres long.

Pyrosomes and salps are pelagic (free-swimming) tunicates or sea squirts. All species are open ocean animals that rarely come close to shore, and all are colonial, although many salps can also be solitary.

Pyrosomes are colonies of tiny animals that form hollow tubes sealed at one end – the long tube species in the first part of the video is giant pyrosome Pyrostremma spinosum – it can reach 30m in length! Pyrosomes get their name (Pyro = fire + soma = body) from their ability to emit light (bioluminescence) – colonies can glow or flash light at night, particularly if touched. Another Mysterious Giant Pinkish Blob was discovered Floating in Cuban Waters.

This odd 12-metre, 13-tonne “Chilean blob” shocked the world when it washed ashore on Los Muermos beach in 2003. It also puzzled marine biologists which first speculated the blob was a type of giant squid. However DNA tests eventually determined it was the remains of a sperm whale. I would say it is pretty much similar to what we see in this video.

5. The Montauk Monster from New York 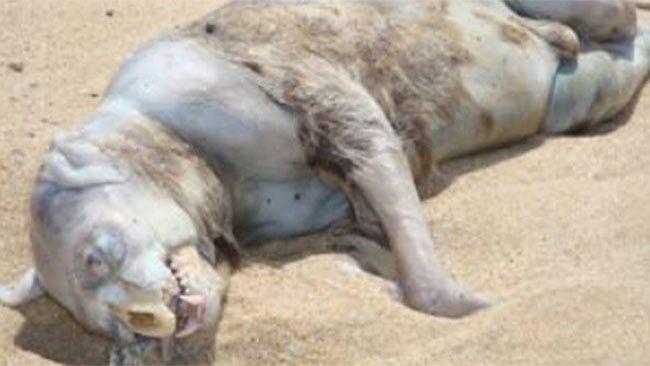 The Montauk Monster was an animal carcass thought to be a raccoon that washed ashore on a beach near the business district of Montauk, New York in July 2008.

The identity of the creature has been the subject of controversy and speculation. It is not known what happened to the carcass. To me it looks like a decaying pitbull.

In September 2009, a strange hairless creature found in a South American cave had people believing aliens had landed.

Dubbed the ‘Panama Creature’, ‘Panama Monster’ and even the ‘Panama ET’ the creature was discovered and killed by a group of teenagers in the town of Cerro Azul.

Listen to spooky and mysterious sounds recorded in the deep oceans.

I probably for forgot many other weird sea monsters living in our oceans. Please submit them in the comments below!