Ebola may not be the only cause of fear to arrive in the US recently. Yellow fever mosquitoes, responsible for dengue, chikungunya and yellow fever, have been found in the Los Angeles region.

The yellow fever mosquito – photo above – has been found in Commerce and Pico Rivera. These mosquitoes can spread the three deadly tropical viruses to humans through their bites.

Known as yellow fever mosquitoes, the insects were found Oct. 7 and 8 in Commerce and Pico Rivera, respectively, according to the Greater Los Angeles County Vector Control District.

The Aedes aegypti species, which has black and white stripes and grows to about a quarter-inch in size, can transmit dengue, chikungunya and yellow fever — viruses that can cause painful symptoms including headaches and high fever, officials said.

“While these debilitating viruses, so far, aren’t locally transmitted in L.A. County, the mosquitoes that can transmit them are now here,” Susanne Kluh, the district’s director of scientific-technical services, said in a statement. “Infected travelers can bring these viruses to Los Angeles County.”

The mosquito is the third species of the Aedes genus found in Los Angeles County in the past three years, said district spokesman Levy Sun.

In September 2011, officials found Asian tiger mosquitoes, which come from Southeast Asia, in South El Monte and El Monte. The mosquito population has since grown and spread into 10 neighboring communities, officials said.

Then this summer, authorities found Australian backyard mosquitoes in Montebello and Monterey Park.

The yellow fever mosquito — which was first found in California, including in the Central Valley, in 2013 — is an aggressive daytime biter that thrives in urban environments, preferring small, man-made containers to lay eggs.

Determining how the Aedes species were introduced to California has been difficult, but officials say imported tires and plants are typically to blame. They can also travel via planes, ships and other vehicles.

Ebola may not be the only cause of fear to arrive in the US recently. 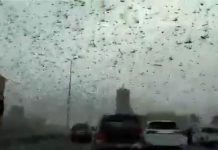 This Plague of Locusts Is Straight Out of a Horror Movie: Millions of Insects Attack the Gulf Region in the Middle East, Darkening the... 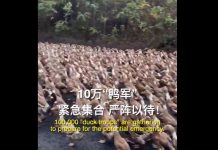 While Billions of Locusts Are Approaching, China Sends 100,000 Ducks to Devour the Insects (Video) 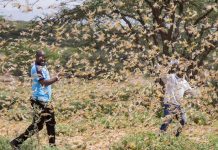 Catastrophic Locust Invasion in East Africa Reaches Full-Blown Crisis as the Billions of Devastating Locusts Spread and Could Become the Most Devastating Plague in...