Do you see this?

This picture depicts actually three mind-blowing weather phenomena at once.

The vertical line rising from our star is a sun pillar. Such vertical light pillars often form when snow or ice crystals reflect light from a strong light source like the sun or moon.

The feather like structure sitting at the extremity of the sun pillar is called an upper tangent arc. These incredible optical phenomena appear over and tangent to the 22° halo around the sun, when hexagonal rod-shaped ice crystals in cirrus clouds have their long axis oriented horizontally. Like many other halos, upper tangent arcs grade from a red inner edge to a blue outer edge because red light is refracted more strongly than blue light. 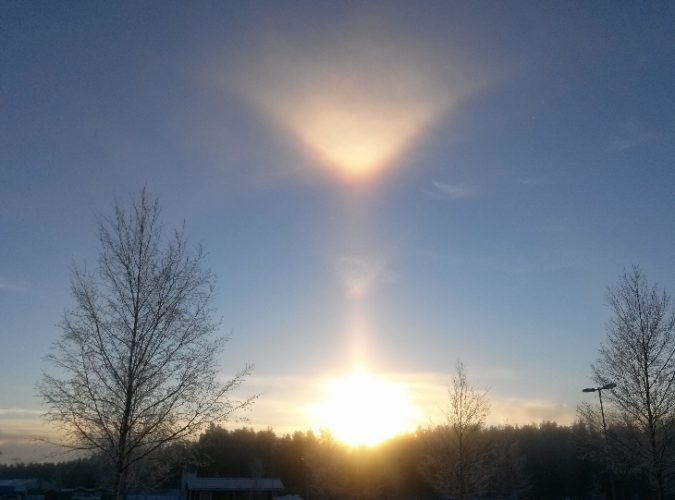 But the rarest and most enigmatic weather phenomenon is this small V shaped arc between the sun and upper tangent arc. You see it? It’s the elusive and mysterious Moilanen arc. The rare “V” shaped arc, varying in position with solar altitude, has been observed during natural halo displays but is seen more often in the diamond dust formed downwind of ski-slope snow machines.

And, yes, these beautiful pictures by Anna were taken @ Falun, Sweden, where snow cannons were running at full blast to cover the valley in a thick mist of ice crystals!

But I prefer adding mystic and magic to our world… There is really a new dimension opening up in Sweden!