What is this mysterious and terrifying creature? Any ideas?

The strange animal was found dead on a Santa Barbara Beach following the intense storms that hit California last week! 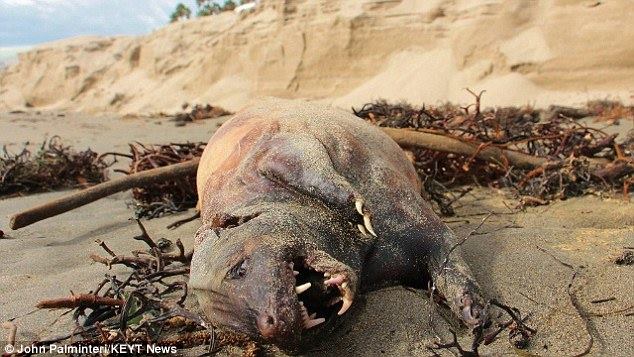 The terrifying creature has sharp claws and teeth. It was discovered on a beach in Santa Barbara on Tuesday, December 16, 2014 by beachgoers. The monster is brown and was found close to a drainage pipe. Report starts at 0:27

The beast has not been identified yet. People are terrified as no scientists are capable of telling what this weird animal is…

But wait a minute… A similar creature had been found in San Diego in June 2012 by Josh Menard. According to Josh, the weird animal remains was 2 feet and a half long and his body had the form of a boar with giant teeth. OMG!

I would guess this weird creature is a terrifying dog that was killed by the brutal storms that hit Santa Barbara a week ago.

If you want some more, here a compilation of terrifying monsters found on beaches around the world!