One of the oddest phenomena to roll up on the shores of the Great Lakes has returned.

Chilly temperatures, heavy snow and strong winds have created ice boulders. And some say they are larger than ever.

These giant bowling balls, 4 feet or 5 feet across and up to 50 pounds, have washed ashore from Lake Michigan. Cool phenomenon! Here some examples from Sarnia, Ontario:

The arctic temperatures across the eastern and Midwest U.S. did not only trigger loud booms but were also responsible for the formation of giant ice boulders on Lake Michigan. 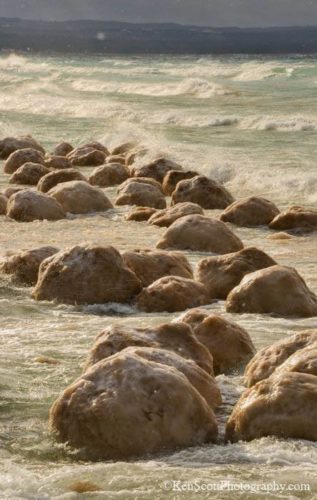 This other video is from Joshua Nowicki who captured these weird ice spheres on the shore of Silver Beach in Saint Joseph, Michigan:

These amazing ice balls form when chunks of ice flow through waves created by strong winds. And eventually, they take on a sphere-like shape.

These balls of ice and snow formed just on New Year’s Eve along the Lake Michigan shoreline in the Leelanau County area:

You have to be lucky to see some of the amazing natural occurrences. You never know what you’ll see, that’s the beauty of Nature!