What is the source of the mysterious giant methane mass over Southwest?

A giant mass of methane hanging over Four Corners – where Colorado, New Mexico, Utah and Arizona meet  – is the country’s largest concentration of the greenhouse gas. But no one knows where it came from. 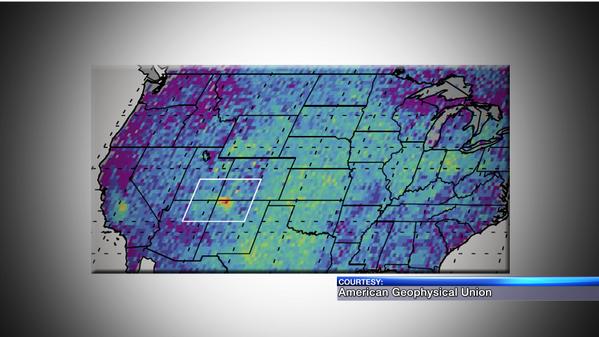 The report that revealed the methane hot spot over the Four Corners region – where Colorado, New Mexico, Utah and Arizona meet – was released last year.

Now, scientists from the University of Colorado, the University of Michigan, the National Oceanic and Atmospheric Administration and NASA are conducting a month-long study to figure out exactly where it came from.

Last year’s study by NASA and the University of Michigan was based on images from a European satellite captured between 2003 and 2009. They showed the methane hot spot as a red blip over the area, which is about half the size of Connecticut.

The study found the concentration of methane detected there would trap more heat in the atmosphere than all the carbon dioxide produced each year in Sweden.

Methane doesn’t last as long in the atmosphere as carbon dioxide, but it’s far more potent for capturing heat in the short term.

Methane occurs naturally and also is emitted by landfills and the agricultural and oil and natural gas industries.

One possible source of the hot spot is methane released from the region’s coal deposits.

Methane also is released by coal mining and oil and gas drilling systems, and cattle produce large amounts of the gas. Scientists can pinpoint the kind of methane created by fossil fuels by looking for the presence of associated hydrocarbons.

The methane emissions pose no direct safety or health risks for Four Corners residents, although the hot spot does factor into overall global warming.

Also, methane emitted from traditional oil and gas operations usually is accompanied by hydrocarbon emissions that can create ozone, a pollutant that leads to smog and is linked to asthma and respiratory illness.

For the next month, scientists based in Durango will fly in planes with a variety of instruments that can sense methane in the San Juan Basin. Crews in vans will follow up on their leads on the ground.

The European satellite that captured the hot spot is no longer in use, but Japan’s GOSAT satellite plans to focus in on the Four Corners when it passes over the area.

It’s possible methane levels over the Four Corners have changed since 2009, said Gabrielle Petron, a scientist at the University of Colorado’s Cooperative Institute for Research in Environmental Sciences who is working on the latest study. Coal bed methane operations have declined since then, but oil production has increased.