A police SUV was swallowed by a sinkhole Friday, June 5, 2015, in Sheridan, Colorado.

The police sergeant in the SUV was able to climb out of the car and the sinkhole. 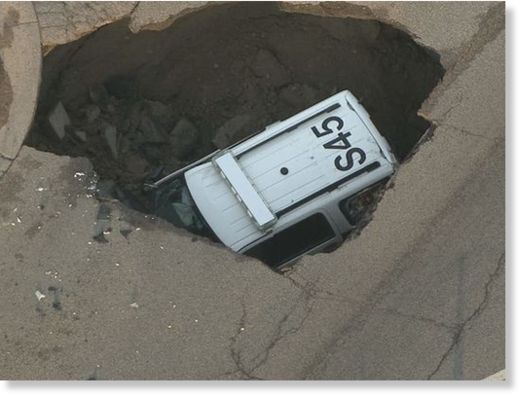 As described by Sgt. Greg Miller:

[quote_box_center]Next thing I know … dirt — I’m assuming dust from the airbag — was floating around and everything. I hear the rushing water, and all I see is a dirt wall in front of me. The door wouldn’t open, so I had to crawl through the window. I reached up, grabbed the rails at the top of the roof, pulled myself up, got on top of the car, and that’s when I reached up and pulled myself up out of the hole.[/quote_box_center]

The sinkhole exposed a gas line, but there is no break in the line.