Last month, a devastating blizzard in Iceland buried horses and houses in meters of snow. A few days later, on December 31, 2019, another strange weather phenomenon struck near Richland, Washington state. But this time, the rescues had nothing to do with wintry weather. Several drivers had to be rescued by snowplows after getting trapped in their vehicles by gigantic 30-foot-high piles of tumbleweeds along State Route 240.

#tumblegeddon After 10 hours of SR 240 being closed last night on New Year’s Eve, it was opened around 0430 thanks to @WSDOT_East We still have one abandon car trapped in the tumbleweeds that was found at daylight, luckily no one was in it. pic.twitter.com/df7XbnqafE

The gigantic piles of tumbleweeds measured up to 30 feet and blocked State Route 240 in both directions on New Year’s Eve, around 6:30 p.m., near West Richland, Wash.

Our crews are continuing to keep watch on SR 240 and the tumbleweed impacts there. They will be patrolling through this evening to help keep the road open to traffic. Please take care if you choose to travel through this area as winds continue to move the tumbleweeds around. pic.twitter.com/d6dlQPvESL

Several cars, including a semi-truck were left stranded by the tumbleweed invasion.

Here are a couple pictures we just received from the crew that was out last night. As you can see, there is a semi truck buried out there and the tumbleweeds almost swallow the snowplow trucks. Amazing images from an unusual job. pic.twitter.com/GbEYUNcPEg

Department of Transportation workers had to make their way through the 20-30 feet high piles of tumbleweeds in the dark as some drivers can still be seen in their vehicles.

One of the first rescue man on site reported that the tumbleweeds were piled between 20 and 30 feet high in some places.

SR240 at mile post 10 is closed in both directions. DOT is working on clearing. Several vehicles trapped in the tumble weeds. Use alternate routes.-S.C. pic.twitter.com/xD2GfUluim

This ‘Tumblegeddon’ is due to strong winds that created a much larger blockage than normal, burying cars that stopped to avoid hitting the tumbleweeds.

We’re still working on clearing the roadway with @WSDOT_East . We are unsure when the roadway will be opened. Tumbleweeds are piled 20-30 feet in places. S.C. pic.twitter.com/zFbA3luscg

Troopers finally found an abandoned car on Wednesday, but no one was inside. They probably went to a party… What do you think?

People were still stuck in those mountains of tumbleweed at midnight and open their bottles of Champagne trapped under the weeds. No injuries were reported, but five cars and one 18-wheel semi-truck were trapped in this weed apocalypse.

Here is another proof of Russian interference! Yep, not too many people know that tumbleweeds are Russian thistle ;-). More headlines on Strange Sounds and Steve Quayle. [WSDOT] 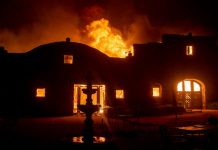 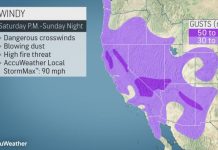 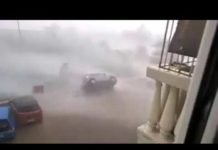