A powerful storm taking shape across the central part of the country will rapidly strengthen into a bomb cyclone as it moves east, bringing damaging winds, heavy rain and even snow from Louisiana to Maine and even Quebec.

Yes, as much as one-third of the continental United States could be in for rough weather going into the weekend!

Frigid Arctic air is about to collide with warm air from the Gulf of Mexico over the Great Plains. The Jet Stream will continue to ram cold air into this situation and push the storm to the northeast, bringing snow and thunderstorms as far as Canada’s Maritime Provinces by the beginning of next week.

The convergence of forces is expected to create a situation called “explosive cyclogenesis,” in which the atmospheric engine that drives storm creation would go into overdrive, rapidly strengthening into a cyclone with powerful winds and heavy precipitation in just a matter of hours. The storm this dynamic produces is called a “bomb cyclone.”

A combination of extremely strong winds and snow promises to wreak havoc over the Northeast as the cyclone reaches hurricane-level strength off the Atlantic coast. Blizzard-like conditions and widespread wind damage are prominent concerns across the interior of the Northeast.

The National Weather Service has issued Winter Storm Warnings and Winter Weather Advisories stretching from Denver, Colorado, to Kansas City, Missouri, for Thursday, where as many as six inches of snow could fall.

Key Messages have been started for the upcoming winter storm that will stretch across the interior eastern United States beginning late Friday. pic.twitter.com/PN49ItczXS

The storm will then bring snow to Oklahoma and the Texas Panhandle before striking the Ozark Plateau, the Ohio River valley, and the Appalachian Mountains, where winds will get even stronger, reaching 40 to 60 miles per hour, or roughly tropical storm-strength.

The storm’s arrival will see a quick decline in temperatures, falling by several dozen degrees Fahrenheit in a couple of hours. 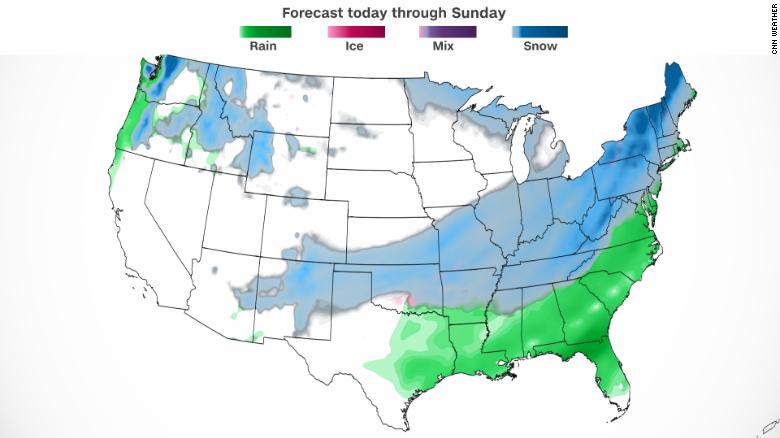 By Friday night, the storm is expected in New England. The storm’s outer bands could bring damaging winds and rain to the more temperate parts of the East Coast as well, as areas close to the Atlantic coastline are expected to be spared of the coldest weather.

“All model guidance has surface wave (the storm) rapidly intensifying as it tracks somewhere between the I-95 corridor to Cape Cod, then along or just off the Maine coast as a sub 970 mb low,” said the National Weather Service in Boston.

A 970 millibar low would be equivalent to a Category 2 hurricane.

By Saturday, snow is expected in the Great Lakes region and on Sunday, the storm could cross into Maine and Quebec.

The low will continue to strengthen overnight Saturday, which, in conjunction with very cold air moving into the area, will support strong to perhaps damaging winds as the low exits southern New England late Sat into Sat night,” the weather service said.

The strongest winds are forecast to be off the coast of the Northeast in the Atlantic Ocean, with winds up to 70 mph possible. However, cities including New York City, Boston and Washington, DC, can expect extremely powerful wind gusts ranging from 30 to 50 mph, which raises concerns for falling trees and power outages across the region.

The combination of significant snowfall in these areas with the strong winds from the bomb cyclone will create the potential for hazardous blowing and drifting snow in the area. This could lead to whiteout conditions and make travel extremely dangerous. 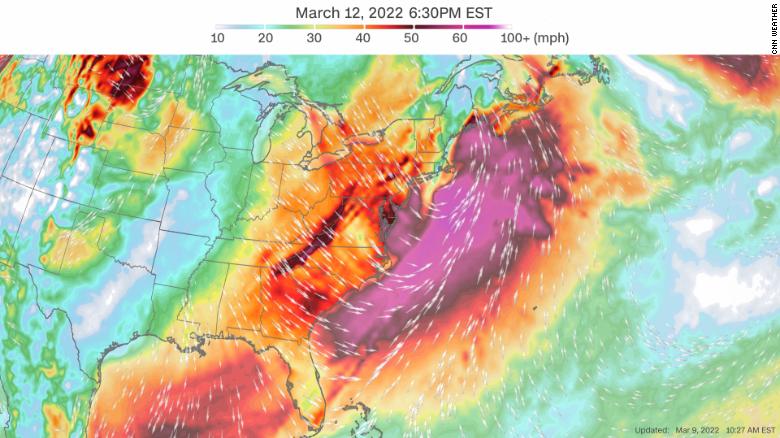 The South will also feel the return of winter

The storm will take aim at the Deep South and Southeast first. Cities including Atlanta, Birmingham, Alabama, and Charleston are expected to see heavy rainfall and possible thunderstorms as the system moves in from Friday night to Saturday morning.

This precipitation will change into a wintry mix in some locations and eventually snow as the cold front causes temperatures to plummet well below average.

Snow is forecast to be seen across parts of many Southern states including Alabama and Mississippi. Even Louisiana could see a few flakes mixed in with the rain.

“Currently in the forecast we have a large area of the region mainly eastern Arkansas and west Tennessee with 1 to 2 inches of accumulation for the Friday night into Saturday morning time frame,” the weather service in Memphis, Tennessee, said.

So keep that winter coat out for a little while longer… Because:

“Behind the front, much below normal temperatures are expected from the lower Mississippi Valley through the Ohio Valley on Saturday, and into much of the East by Sunday, with daytime highs 20-30 degrees below normal in some places,” the Weather Prediction Center said.

Low temperatures across the South are forecast to get down into the teens this weekend, with wind chills around zero degrees in some areas.

A bomb cyclone also triggered the devastating floods in 2019… You remember?

Big winter storms are by no means unheard of in eastern North America, where Spring’s earliest flowers are already poking out. The 1993 Storm of the Century, which brought destruction and chaos from Cuba to Canada, also formed in mid-March. That cyclonic storm killed 318 people and dumped several feet of snow and ice across the continent. [CNN, Accuweather]