A change in the volcanic activity at Kelud volcano in East Java have been observed over the last weeks. 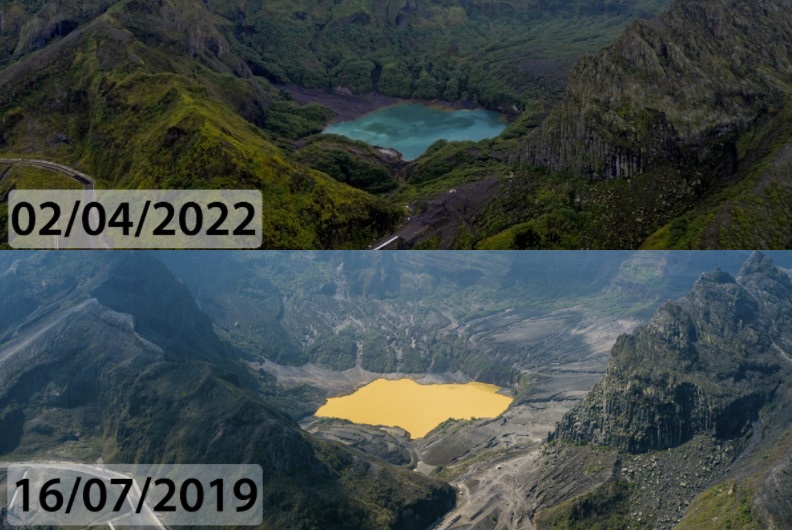 It looks like the water of Kelud`s crater lake have changed color from green to a more turquoise color.

Steam, bubbles and hydrothermal activity in the crater lake of Kelud volcano…

Steam, bubbles and hydrothermal activity in the crater lake of Kelud volcano.

Will be interesting to hear from the Indonesian Authorities @id_magma @PVMBG_ what caused the rapid color change of the lake. pic.twitter.com/fkmogniTNE

Will be interesting to hear from the Indonesian Authorities what caused the rapid color change of the lake.

Current potential hazards are the release of toxic gases and phreatic eruptions around the crater lake. The PVMBG is observing and did not change the level of activity which remains at 1 / normal…

The Kelud (or Kelut) is a relatively small stratovolcano with a summit elevation at 1731m above sea level or 1650m above the densely populated and fertile plains of Kediri and Blitar that surround the volcano.

Kelud volcano is located at about 27 km from the city of Kediri (population: 1,300,000) and lies between the volcanic massif of
Gunung Wilis to the West and the complex of Kawi and Butak volcanoes
to the East.

Kelud volcano is considered as one of the most dangerous volcanoes of Java because of its frequent eruptions. The eruptive activity has typically generated deadly lahars, pyroclastic flows and surges that have claimed more than 15,000 lives since 1500 AD and caused widespread fatalities and destruction.

The crater lake of Kelud is famous for its potential to release devastating lahars whenever an eruption occurs. The 1586 eruption produced one of the worst lahar in the historical record of volcanic eruptions and took the lives of about 10,000 people.

In 2007, an effusive explosion filled the crater with a lava dome. It last erupted on February 13, 2014, killing 7, evacuating 200,000 people as well as destroying the lava dome and ejecting boulders, stones and ashes up to West Java about 500 kilometers away from Mount Kelud.

The crater fills with water during the rainy season. Do you think the lake is filling up with gas from below and is about to release them in a deadly asphyxiating eruption? There are indeed some killer lakes around the world, even in the US, at Mammoth Mountain:

That would be really nasty! Now get ready and be prepred!