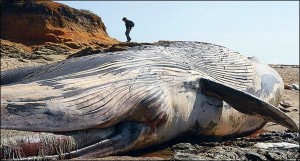 It has long been suspected that sonar signals (the sound detection of submarines) could be responsible for whale and dolphins strandings.

Now researchers have shown that whales are affected by these acoustic disturbances: They stop eating, swim away and loose energy.

The acoustic sense plays a central role for whales and dolphins. They use it to communicate with each other (whale songs) and to orient themselves (echolocation) in the deep and dark ocean waters.

Just listening to the noise, you know it’s bad!

Even scientists demonstrated the negative effects of sonar noise on whales’ behavior. Both studies were funded by the US Navy (somehow contra-productive for them, no?).

The first research work concentrated on the effect of sonar sounds on Cuvier’s beaked whales (publication link). These whales are categorized as toothed whales and strand relatively frequently. Results show that this kind of whales interrupted their foraging, when hearing a military sonar sound.

The second scientific paper reports a study made on 17 blue whales (Balaenoptera musculus), which are considered as endangered species by the IUCN (World Conservation Union). In this experiment, the whales were divided into different groups and submitted to different sonar waves. Results show that whales stopped looking for food during 62 minutes after being exposed to the sonar, thus destabilizing their energy balance. Less energy would also mean more strandings.

Thousands of dead sparrows mysteriously fall from the sky in Bali, Indonesia