Certain hoaxes last for years like the one claiming a double moon on August 27. Another end times hoax states that US scientists predicted a global blackout in December that will last for three days, from Dec 23, due to alignment of the universe. This new planet configuration would temporarily introduce our Earth into different dimensions, causing big changes.

But the whole thing is complete bullshit. So if you get emails like the following in the next weeks just don’t be afraid, stay cool, lay back and just have a beer or another drink of your choice. It’s not the end of the world!

“US scientists predict Universe change, total blackout of planet for 3 days from Dec 23.

It is not the end of the world, it is an alignment of the Universe, where the Sun and the earth will align for the first time. The earth will shift from the current third dimension to zero dimension, then shift to the forth dimension. During this transition, the entire Universe will face a big change, and we will see a entire brand new world..

The 3 days blackout is predicted to happen on Dec 23, 24, 25….during this time, staying calm is most important, hug each other, pray pray pray, sleep for 3 nights…and those who survive will face a brand new world….for those not prepared, many will die because of fear. Be happy, enjoy every moment now. Don’t worry, pray to God everyday. There is a lot of talk about what will happen in 2012, but many people don’t believe it, and don’t want to talk about it for fear of creating fear and panic.”

So guys, now you are ready and prepared for the next december blackout hoax. 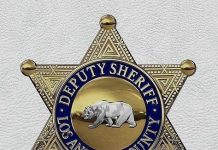 Why does the Los Angeles County Deputy Sheriff’s badge have those horrible triangle designs at the points?