Lost in a remote place of India, a mysterious underground fire is creating large smoking and gasy sinkholes that swallow a forest near Old Wahong Village in Northern Ukhrul.

A continuous flow of smoke and ashes from a swamp in Manipur’s Ukhrul district has sparked fear among villagers who think it might cause volcanic eruption any time.

The heat burns the soil steadily and large areas of the ground collapse after being consumed by the mysterious blaze. The dark maroon burnt soil smells pungent like garlic pickle.

Sinkholes are full of gas and bubbles but the ground is actually not boiling. Smoke radius of about two feet along with ashes have been seen gushing out from the earth’s surface since the last two weeks.

The collapsed area seems to constantly grow: from a 30 sq feet to almost an 40 sq ft area in only two weeks. 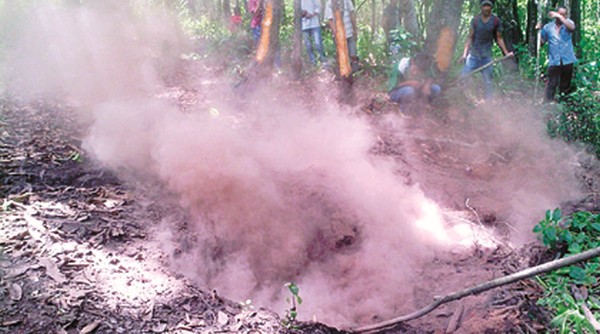 It is not known when the unexplained underground fire has started. Villagers speak of March-April 2015. But it has only been discovered beginning of June 2015.

Hopefully this is only an underground fire. Keep in mind that in 2013, a mud volcano erupted at the neighbouring village of New Tusom.