The following dramatic photos and videos were shot on January 13, 2016, from Hoopstad as a massive and violent sandstorm swept across the Freestate in South Africa.

Sandstorms in the area are so legendary that it has its own Hoopstad Stofstorm Band! 🙂

Hoopstad (Tswelopele) lies between Bloemfontein and the North West Province.

And after the sandstorm there was the much-welcomed rain.

El nino at its best?

The first video shows the power of this dust storm:

Although sandstorms are renowned in the area, South Africa has been experiencing radical and dramatic weather recently with a heatwave in several parts of the country.

Now you have to turn your monitor upside down:

A devastating drought fries most of the country. It was for example 42 degrees in this area – Bloemfontein – last week.

OH my god, these sandstorms are so frightening! 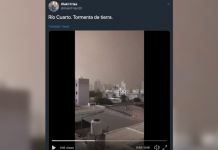 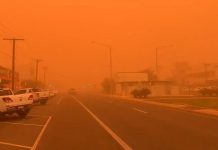