In June 1969, the U.S. Army Corps of Engineers turned off American Falls, one of three waterfalls that makes up Niagara Falls.

This amazing dewatering served to remove the boulders that had piled up at its base since 1931, cutting the height of the fall in half.

The performance will repeat in the coming years when New York State will decide to dry out American Falls once again, in order to replace two bridges.

Again, engineers will employ over 1,200 trucks to dump 28,000 tons of rock into a cofferdam upstream, directing the insane flow of the river – 76,000 gallons / second – to Horseshoe Falls instead.

Now I am sure you have never seen the Niagara Falls without water… Well look at the pictures below:

Here a video about the de-watering of the American Falls:

Then the water returned and the Niagara Falls froze down. Similar headlines on Strange Sounds and Steve Quayle. [Vintag.es] 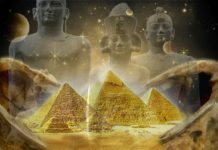 Reconstruction of the ‘Primitive Machine’ in the Great Pyramid