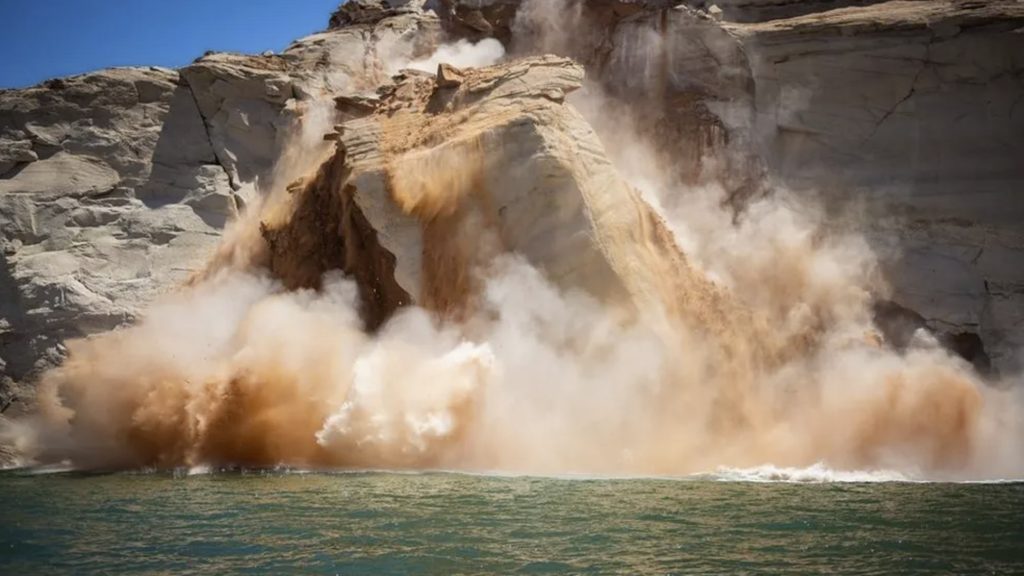 Memorial Day boaters captured the scene on video as a massive rockfall crashed into the waters of Lake Powell.

The dramatic rockslide happened on the Utah side of the lake – the second largest reservoir in the country – where water levels have continued to plunge due to the unrelenting drought conditions gripping much of the West.

Mila Carter, who shot the video, said she was heading to Antelope Point Marina with her husband, Steve Carter, when they noticed rocks and sand falling off the cliff near the entrance of Warm Creek. They stopped the boat and started taking pictures and a video that captured the event unfolding.

Preparedness: Protect your home and car against devastating EMP, solar flare and lightning attacks with the best shield available today…

“We were not expecting anything like that,” said Mila Carter. As the section of the cliff broke off, her husband sped away for safety.

Once the rock fell into the lake, Mila Carter said, a big wave formed. “I feel like the video didn’t capture the wave at the end … it was very impressive,” she said.

No one was injured in their boat, she said, adding that “Luckily, no one was around.”

The rockslide comes as Lake Powell continues to drop to previously unthinkable lows amid the West’s megadrought.

Last month, the federal government announced it’s taking unprecedented, emergency steps to help boost water levels at the reservoir by releasing more water from upstream on the Colorado River, while holding back water in Lake Powell itself, instead of it being sent to states downstream.

Preparedness: Remove all the contaminants out of your tap water with the best home filter available today…

At around 26% full, Lake Powell is at its lowest level since 1963, when the lake’s Glen Canyon Dam was built and the reservoir – near the Utah-Arizona border – was filled.

Tyler Knudsen, a senior geologist with the Utah Geological Survey, said it’s difficult to say this early whether the Memorial Day rockfall is linked to the ongoing drought, since rockslides can be triggered by several other external factors – including rainfall, earthquakes, and daily temperature fluctuations.

Even the wave action from boats or the wind, he said, can help slowly erode slopes and potentially trigger rockfalls.

Preparedness: You will never go without electricity with this portable power station…

“We see increased rockfalls during intense precipitation events and earthquakes, but apparently none of those conditions existed at the time of the rockfall in the video, so its trigger remains unknown,” said Knudsen. “Water-level decline certainly could have been the trigger, but, again, we can’t say for sure at this point.”

“We do know that the creation of Lake Powell and its historical water-level fluctuations have contributed to elevated rockfall generation,” he said. Either rising or declining water levels can contribute to rockfalls, he added.

Preparedness: SAVE your retirement money by investing in GOLD, SILVER and other PRECIOUS METALS…

Low levels can also increase the pressure of the water remaining within the emerging rock mass as it tries to equalize to a lower reservoir level.
There is no water. See what Lake Powell looks like today

“Is it possible that some cliffs that are now being dewatered for the first time in over 40 years are generating more rockfalls? Yes, it’s possible,” Knudsen said.

Rockfalls are a major part of the natural expansion that continues to create the lake’s Glen Canyon, experts say. While there is likely at least one smaller-sized rockslide event happening each day somewhere within Glen Canyon, larger rockfalls – such as the one Mila Carter and her husband witnessed – are more infrequent.

Preparedness: Health Ranger Store: Eat HEALTHY and non-GMO food to heal you and the world…

“Since the great majority of rockfalls within Glen Canyon are not documented, we don’t have enough data to develop an exact frequency or recurrence interval for events such as this,” said Knudsen. But larger rockfalls, such as this, will “likely happen at least once every few years in Glen Canyon.”

As Lake Powell and its downstream neighbor, Lake Mead – the largest reservoir in the country – continue to drop at alarming rates, Mila Carter considers herself lucky to have had the opportunity to still enjoy the lake and catch this moment.

“We got to see nature and how strong it is, and how small we are,” she said. [CNN]

Weather chaos! Massive blizzard storm dumps 3 FEET of snow at the end of May in northwest Wyoming and in the South Hills of...

Gotta keep the aliens away…

Electricity and power collapse! Lake Mead is less than a day from dropping below 1,050 ft. – Only 5 of Hoover Dam’s 17 turbines...

Weather wars! Nebraska Panhandle slammed with up to 15 inches of May snow – Road closure atop Mauna Kea, Hawaii – And more…