Following a string of intense weather events taking place in Alberta over the last month, central and southern parts of the province were the latest to get hit with massive hail the size of grapefruit, which caused a lot of damage to cars in the process.

Another video shows some people inside a car, trying to protect themselves from the giant hail exploding the windows of their car…

Weather warnings on Monday, August 1 had called for “golfball-sized” hail and even potential tornadoes through the afternoon and evening in Kneehill County and Red Deer County.

While no tornadoes were reported, areas around Red Deer did see some huge hail.

Northern Hail Project shared an image of hail it had found just northwest of Markerville, which measured around 106 millimeters across.

I can’t even. I panic took this without putting it in the ruler properly 😂. Tennis balls when it was NW of Markerville 17:40. They’re still coming down. Stay clear. #abstorm pic.twitter.com/TpGJCUD6ZM

Drivers in the area had to contend with the massive hail storm, which left some vehicles damaged.

In videos shared on Twitter, drivers on the Queen Elizabeth II Highway just outside Red Deer were seen stranded by the side of the road with their car lights and windscreens smashed.

#abstorm my heart goes out to all the ppl stranded along the QE2 outside of Reddeer. Vehicles are completely totalled with ppl stranded. Windows and lights smashed out. Vehicles covered in hail dents:( pic.twitter.com/gWKFfMNatL

Alberta RCMP said around 70 vehicles on the QEII had their windows and windscreens smashed in the hail.

Others were able to share the damage to their vehicles up close. One Twitter user said they’d been stuck in the hail storm by Antler Hill and the pictures of their vehicle showed a completely shattered windshield and huge dents all over as a result of the extreme weather.

Got stuck in the huge hail storm at the bottom of Antler Hill between #reddeer and #Innisfail. Thankfully it’s just the vehicle that got damaged. Crazy stuff to experience though. #abstorm pic.twitter.com/3hLnJDhEK7

Meanwhile, one person was able to capture the scale of the damage to a sunroof that had completely shattered and collapsed due to the hail storm. [Global News] 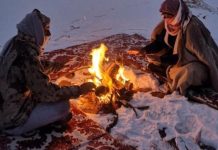 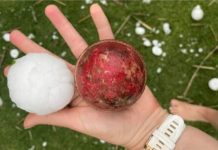 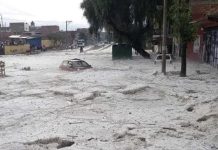