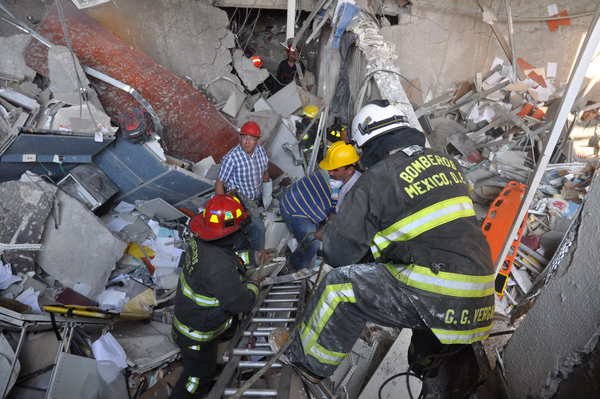 A serious and still unexplained gas explosion occurred on Thursday afternoon at around 4 PM in the administrative tower of the state oil company Pemex in the center of Mexico City which killed around 25 people and injured another 100. The explosion occured in the basement of the 214 meter high headquarter building, just at the time the majority of the approximately 3,500 employees are leaving work. As shown in the videos, the lower floors were severely damaged, and the whole area was littered with broken glass and debris. To search for trapped and buried victims, sniffer dogs were mobilized. – NY Times

Pemex is the largest company in Mexico and one of the ten largest oil companies in the world which was plagued by several disasters during the latest years. Last September, at least 30 people died in the fire at a gas station in the state of Tamaulipas. Impressive!

In December 2010, a pipeline fire in the center of the country’s killed 29 other persons.

Finally, in October 2007 an oil platform explosion in the Gulf of Mexico killed 20 workers. (I did not find any video about this event but about another event in July 2007