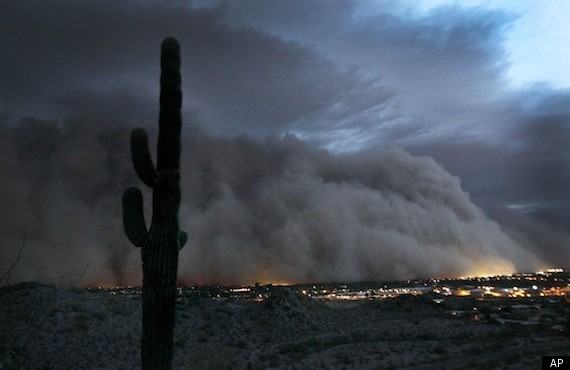 I discovered these great videos through a facebook follower. Thank you for your help! On this video, Mike Olbinski, a local Arizona photographer, was able to capture the powerful wall of dust as it descended upon Willcox on July 2 2013. You will see, it is pretty impressive and shows the power of the event!

This is what he writes about his video:

We drove over four hours to get to this spot and somehow timed it perfectly to intercept a dust storm hitting Willcox, Arizona.

In the video you’ll see it twice…I captured it the first time in Willcox, and then we blasted southwest on Interstate 10 and got back in front and timelapsed a little more.

The storms behind it had 1-2 inch hail in them and the winds were strong…especially right at the end of the final clip. You can see on the far left how they suddenly exploded off-camera. Was intense.

First dust storm of the 2013 monsoon season…hoping for more!

He also captured another haboob this time over the Tohono O’odham nation on July 10th, 2013

Remember: About 1 month ago, an apocalyptic dust storm spread across Humboldt County in Arizona.