An enormous atomic storm cloud engulfed the sky above Phoenix, Arizona on August 2, 2016.

The once in a 100-year torrential rainstorm pummeled the city and turned roads into rivers.

Today’s monsoon storm brought much needed rain to the Valley of the Sun today! It was really exciting! In fact this cloud is the cause of the flooding and traffic jams today. Look for the creation of clouds in the 2nd segment of thisvideo. It’s really cool! “To use this video in a commercial player or in broadcasts, please email [email protected]”. #azmonsoon #azstorms #monsoonlenny #azwx #timelapse #timelapsevideo #timelapsephotography #itsamazingoutthere #storm #clouds #weather.

Lennis Keyes, the uploader of the video, explains:

Today some parts of Phoenix received over 2 inches of rain. In fact this cloud is the cause of the flooding and traffic jams of yesterday. The large cloud sat hovering over Glendale for a long time before it began to race across the valley to the east.

The Phoenix area received up to two inches of rain in one hour and the storm was described as a once in a 100-year event for the area. 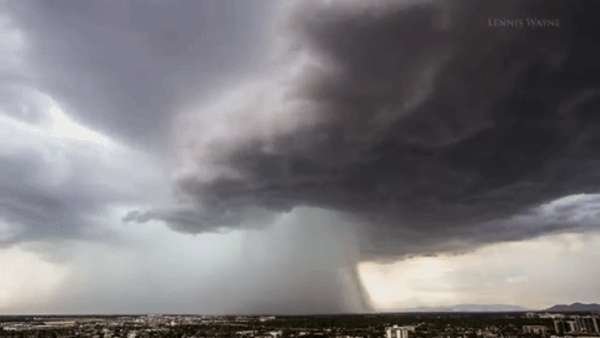 This is the second microburst in less than a week. Such downward wind brings heavy rain and damaging winds in thunderstorms. Microbursts form when a storm’s downdraft is so strong that it looks like the clouds are coming down like an atomic bomb over Phoenix, Arizona.