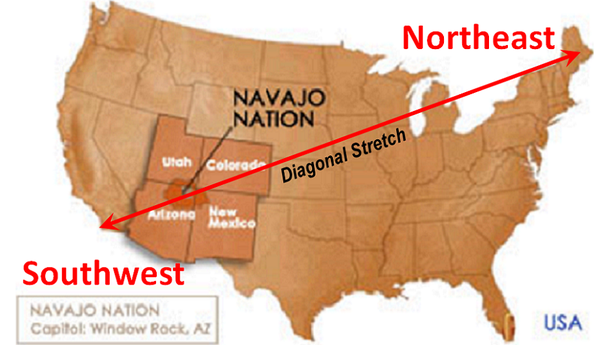 Here a list depicting the new normal for Arizona:

Mar 16 2013 – Central Phoenix house explodes
On Saturday around 7:30 a.m., a house exploded blowing out several brick walls and lifting the roof briefly off the house. Sparks shot from the house and black smoke billowed into the air.

Mar 13 2013 – Chandler Heights in Scottsdale
A sinkhole opened around 10:30 p.m., rupturing a 30-in. irrigation line. Sections of the road sank into the sinkhole.

Feb 27 2013 – Loud booms in Tucson
Around 7:45 p.m., Northwest Fire District received about 100 calls in a 15-min period from a large area of the city reporting loud boom accompanied by rattling windows and shaking walls.

Feb 25 2013 – Two large sinkholes open in Glendale and Phoenix
In Glendale, a giant sinkhole, 12 ft. wide and several feet deep opened in the middle of intersection, forcing closure of northbound lane on 67th Avenue. A second sinkhole up to 15 ft. deep opened in Phoenix.

Jan 25 2013 – Explosion in Tucson storage unit
Tucson Fire Department responded to explosive fire in a storage unit at about 9 a.m. As firefighters approached, a large explosion blew off the top half of a roll-up door.

Dec 24 2012 Huge sinkhole in Yuma
A huge sinkhole opened in the northbound lane of a busy roadway. The enormous hole, 60 ft. long by 30 ft. wide and 25 ft. deep damaged pavement and shoulder.

Dec 4 2012 – Loud booms back in Verde Valley
Just before 5 p.m., a loud boom, followed by a second blast, shook windows over a distance of about 22 miles. Residents as far away as Flagstaff called 911 to report strange booming sounds. Sedona Fire District also dispatched a crew to check out a report of a “strange odor.”

Nov 2012 – Loud booms on Arizona-California border in Imperial Valley
A loud boom was heard around 1 a.m. About 5 minutes later, a second and then a third loud boom shook the area. El Centro in Imperial Valley, California, borders Arizona and Mexico. It is 113 miles east of San Diego, which also experiences loud booms and “strange odors.

As you might have understood, Arizona sits in a stretch-zone: Loud booms, sinkholes, gigantic earth cracks, and house explosions are its “new normal.”

Loud booms are probably related to plate adjustments and they are heard all over the world in stretch zones areas like Arizona, where land is sinking as supporting rock pulls apart, creating a void . . . and boom, boom, the air above claps. Thus, loud booms are caused by the heaving, dropping, and clapping earth, similar to the mechanism that produces thunder, clapping air masses. Stretch zones areas regularly experience not only loud booms and sinkholes, but also landslips and landslides, exploding and collapsing buildings, and huge cracks that split the earth wide open. Massive sinkholes have been on the increase in Arizona since well before December 2012. Unusual “geological events,” as they are now known, have become the new normal for Arizona. As you read up, two massive cracks in the earth have opened in different locations in the Navajo Nation – Feb 20 and again last week on Mar 19. Add to the mix a giant dust cloud, known as Haboob (Arabic for “strong wind”), that swept through the greater Phoenix area last summer. The Haboob, estimated to be about 600 meters (2,000 ft.) high, knocked out power, shut down the airport, turned swimming pools into mud pits, and caked cars with dirt. Are all these geologic events a coincidence? You be the judge! But you have to be fast!